We have a dog. He's a good dog, and very sweet, although a 70-pound golden retriever who thinks he's a lapdog can be a challenge. 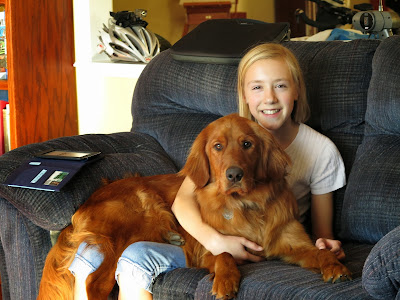 One of the current challenges is that he's decided that it's ok to cruise the countertop for goodies while we're off at work and school. We need some negative reinforcement... 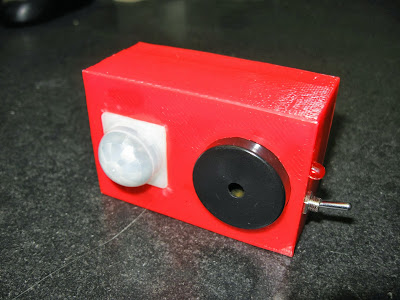 The sensor (on the left of the box) is a Passive Infrared (PIR) sensor. I do not know the origin of this particular unit, it's been rattling around my parts-bin for a few years; but similar units are about $10 at Adafruit.com. It puts out a logic high any time it detects motion. That PIR signal is connected to the RESET pin of a 555 timer chip, which is wired to generate a 2.5kHz square wave. The 555 output goes to the piezo buzzer on the right of the box. A switch and power-on LED complete the electronics.

Net result: loud annoying beep any time the sensor detects a dog in the area. We're now working on sensitizing the dog to the noise: every time it goes off we all yell "NO! BAD DOG!" so he starts associating that particular beep with "NO!" Next, we'll put it on the countertop, aligned so that it trips whenever he puts his nose over the edge.

Will it work? I don't know. It'll probably work better than nothing, which is what else we have.

If you're curious, the box was made in Google Sketchup and printed in ABS on a Solidoodle. The box holds all the parts and the circuit board, with a 9V battery to run things. I could really get used to this whole 3D printing thing: custom hardware like this is very cool. 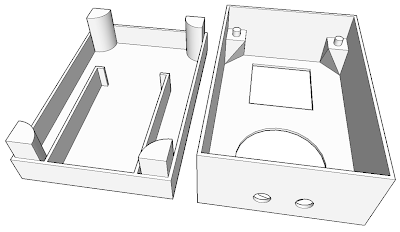