This is an update on my earlier Remote key-switch operation post. These things have become rather useful around the lab! In addition to the original key-switch operation, they've been put to use running optical shutters for pump lasers, turning deposition shields inside vacuum chambers, etc. Basically, any time we have a mechanical device we want to be in one of two positions, we use a servo and this board.

The only problem is the inconvenience of programming the limits on the servo. Each application has different desired positions for 'on' and 'off' logic level, and we were having to break out the AVR Programmer each time... So here's the fix. This version has user-programmable limits! 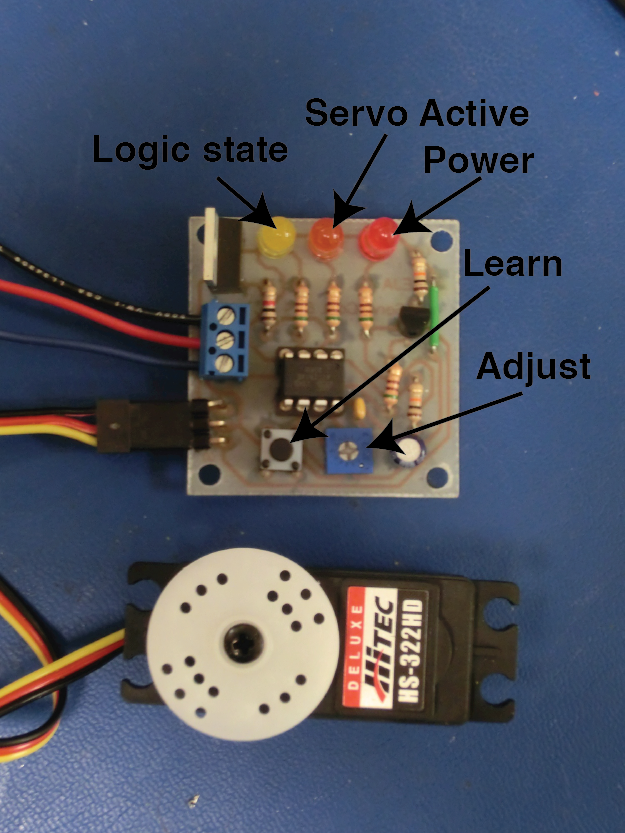 After first turning the device on, apply one logic level (low, say) then press the 'Learn' button. While holding the Learn button, adjust the servo position with the 'Adjust' potentiometer. When the servo is in the desired 'low' position, release the 'Learn' button and the ATtiny45 will store that position in EEPROM. Then apply high logic level, and use the 'Learn' button to teach the microcontroller where the servo should go for high input. Releasing the 'Learn' button stores the high position in EEPROM. From then on, even after power cycling, the device will remember where it needs to go for high and for low input. You can re-program it any time, as often as you like. (Well, up to the limit of EEPROM write cycles for the ATtiny45, which is about 10,000 or so.)

The LEDs indicate power, logic state, and whether the servo is currently 'active'. That last one deserves some more explanation... Servos twitch. They jitter. They are not mechanically (or electrically) quiet. This is an annoyance sometimes, and a serious disadvantage if you need to mount the servo on an optics table. So the other feature to this device is that it turns the servo power off when it's not moving the servo. This may be a disadvantage if you have an application for which the holding force is not negligible, but it's acceptable for our applications. There's a switch in the code so that you can leave the servo power on continuously if you wish.

Another improvement to the previous circuit is that the PWM signal on this version drives a transistor buffer which drives the servo, rather than driving the servo directly with PWM. This allows the circuit to control much larger servos reliably.

It's still limited to 5V supply. The obvious next version would be to add a voltage regulator for the microcontroller, and drive the servo with whatever supply voltage you wanted... but we haven't needed that increase in servo power yet, so haven't bothered.

Here are the EAGLE files and the ATtiny45 code. 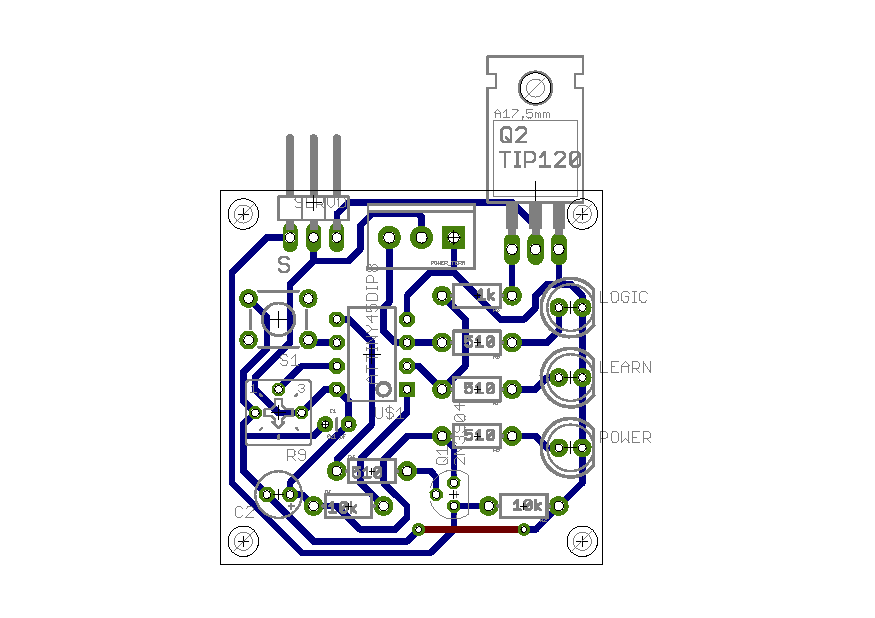