In addition to various things I'm supposed to do, I race triathlons. One of the training tools we use is the interval workout, in which we alternate high- and low-intensity time intervals during the course of a run or bike workout. There's been a bit of discussion during the Monday-Night run recently about whether it might be advantageous to train with randomized intervals instead of with set intervals.

A typical running interval workout might be a 20min warmup, 5 sets of 1min hard 3min recovery, then 20min cooldown. The idea is to replace the main set with 20 minutes of random intervals, during which the hard and recovery intervals vary randomly in length (within reasonable parameters, of course.)

Typical sports-watches have an interval feature that helps time regular intervals, but they don't do random intervals. Here's my solution: use an ATtiny45 to generate the random intervals, and indicate the intervals via a flashing LED. 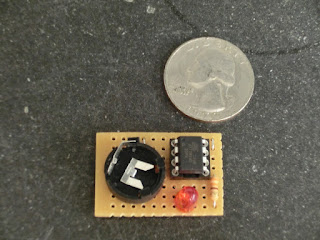 And here's the code.

Programming of the ATtiny45 was done via the Arduino IDE: the fuses on the ATtiny45 are set to use the 1MHz internal oscillator. The circuit itself is simply power and ground to the chip (using a 1225 lithium battery) and an LED with current-limiting resistor on PB0 of the microcontroller.
Posted by Dr. Ayars at 2:01 PM