Update 12/11/11: A fix to the program--- changed to capSenseRaw() instead of capSense(). The problem with capSense() is that it auto-adjusts the output for touch sensing, rather than absolute capacitive measurement. capSense() reports whatever capacitance it observed the first time as zero from then on. This means that if the water level is high when the Arduino is turned on, high will be interpreted as dry... And it's not very convenient to make sure the sensor is outside the tree-stand whenever you first turn the lights on! Kinda misses the point of this whole exercise if you have to take the sensor out, dry it off, turn the lights on, put it back... But using capSenseRaw() takes care of the problem.

One other note: the sensor has to be very waterproof! The 4 coats of polyurathane were marginal: I've since added a thin coat of silicon RTV and it works much better. If water touches the electrode strips, it shorts out the capacitor and the sensing function returns -2, which leads to erroneous reports of low water level.

About a year ago I made a Christmas-tree water-level sensor that didn't hold up well. Here's a link, but don't make that one. It had a flashing LED, then an audible alarm, to let you know that the water was either low or gone. But why use an LED? As "Joe" suggested in his comment last year, the tree has a lot of lights on it already and why not flash them instead?

The functional problem with last year's model is that the copper traces used for the water-level sensor corroded quickly, and the device was useless in less than a week. The fix I came up with this year is to use a capacitive measurement of water level instead of a conductive measurement. This method (and the necessary CapSense library) is described on the Arduino Playground wiki as an idea for a proximity sensor. Since water has a very high dielectric constant, the presence or absence of water significantly changes the capacitance of a pair of copper traces. Measuring the capacitance of those traces then gives you a measurement of water level while keeping the traces isolated from the water.

Here's my sensor. It's just a strip of strip-type protoboard. (It's 4 traces wide, but I'm only using 2 traces.) It's been covered with 4 coats of spray-on clear polyurethane, so it is (one hopes) completely waterproof. There are two neodymium magnets glued to the back so I can mount it to the inside of the Christmas-tree stand. I forgot to put something in the picture for scale, sorry: it's 9cm long. 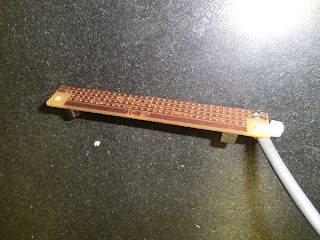 With this improved sensor, I can now use the CapSense library to measure water level without worrying about corrosion of the copper traces. And I probably should have stopped there, but Joe's suggestion just seemed to good to pass up. So here's the schematic for the rest of it: 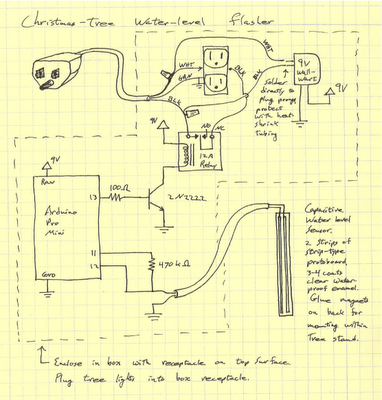 Everything inside the dashed lines is built into a small box. The box has a plug receptacle on the top, into which are plugged the tree's lights. Power to that receptacle is switched by a relay, controlled by an Arduino Pro Mini. (The Pro Mini and relay are powered by a 9V wall-wart transformer, also mounted inside the box.) 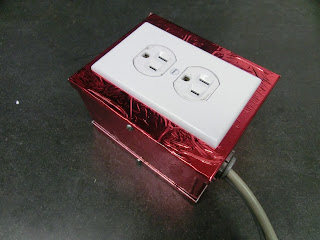 Here's the code. The values of "fair" and "good" will depend on the exact geometry of your sensor and sensor cable. Uncomment the serial lines in that code and see what values are coming back from the Arduino to determine what levels are appropriate for your setup.

A note for the Arduino-haters: Yes, this could be done with an ATtiny85. Here's why I decided to use a whole Arduino this time:
But yeah, it'd be cheaper and more elegant if I just used an ATtiny85. :-)

Update: Since I have the memory available, I tweaked the program a bit. Instead of a fast blink when the tree gets dry, it now blinks "water... water... water..." in Morse code.
Posted by Dr. Ayars at 1:35 PM